Fantasy F1 Masters - Season 1 was the inaugaural season of FF1M. It began at the American Grand Prix at Phoenix in the Summer of 2007. The Drivers Championship was won by Michael Schumacher driving for AquinoPlus who also won the Constructors Championship.

The season saw Michael Schumacher secure the drivers championship at the penultimate round of the season, beating Kimi Raikkonen and Ayrton Senna. The points amassed by Michael also helped AquinoPlus secure the constructors championship.

The first ever FF1M race saw the likes of Fernando Alonso and Kimi Raikkonen race against Ayrton Senna and Nigel Mansell over a sixteen race calendar. The first of those race was held at the Phoenix street circuit, and the unforgiving concrete walls claimed multiple victims, including all four aforementioned drivers. Only nine drivers finished the race, and coming out on top was ARacing's Gerhard Berger. Completing the podium were FJ's Fast Squad's Mika Hakkinen and British Lions' Johnny Herbert.

The Kyalami circuit in South Africa played host to the second race of the season, and many drivers who fell foul of the tight confines of Arizona were much more happy in the Midrand region. Perhaps the happiest of them all was Exolite's Ayrton Senna, who took the win ahead of Berger and AquinoPlus' Michael Schumacher.

After winning in South Africa, Senna was hoping repeat his success in front of his adoring Brazilian fans. Sadly for him and the Exolite team, he would be destined not to finish the race. Instead, it was Michael Schumacher who won in front of the ever consistent Berger, with M-Sport's Damon Hill completing the podium. The two others Brazilians, Rubens Barrichello and Felipe Massa, both finished outside of the points.

The European season began at Imola, with all eyes on ARacing's Riccardo Patrese and the three Ferrari-engined teams. Patrese had a good race to take 4th, his best result of the season so far, and the passionate Italian fans would also see their engine finish 2nd thanks to Damon Hill, but it was Michael Schumacher who took his second win in a row. With that, he took the lead in the championship from Gerhard Berger, who failed to finish.

One of the billed championship favourites, Fernando Alonso, was having a difficult season with only one point from the first four races. However, that changed at Jerez as the Willow Images driver did what Senna wasn't able to do and won in front of his adoring fans. Taking 2nd and strengthening his championship lead was Michael Schumacher, while 3rd was Maestro Motorsport's Kimi Raikkonen, which was his second podium finish in a row.

The tight confines of the Monaco street circuit was next, and the race saw a circuit specialist take a dominant win in the form of Ayrton Senna, his second win of the season. Following him home were Kimi Raikkonen and Fernando Alonso.

The FF1M circus headed back across the Atlantic to another French-speaking country for the Canadian Grand Prix. The race saw a tight battle between three in-form drivers, but it eventually went the way of Michael Schumacher, who took his third win of the season ahead of Ayrton Senna and Kimi Raikkonen. The race also saw Gui Racing's Nigel Mansell score his first points of the season after retiring from the first six races.

From Canada to France, and the third race in a row where the natives speak French. There had already been four different winners from the first seven races, and Damon Hill made it five, which stood him in good stead for the next race at Silverstone. Michael Schumacher continued his strong form and finished 2nd, extending his championship lead in the process, while 3rd was Gerhard Berger.

The eight British drivers were very much looking forward to their home race of the season, but only 25% of them were fortunate enough to even finish the race. Luckily, Nigel Mansell gave his fans something to cheer about as he finished 2nd, but becoming the sixth different winner of the season was Kimi Raikkonen, with Fernando Alonso completing the podium.

Somewhat unusually, the Portuguese Grand Prix was next up at the abrasive Estoril circuit, and having finished every race in the points since South Africa, Michael Schumacher extended his points scoring run by taking his fourth win of the season, with Nigel Mansell and Ayrton Senna completing the podium.

The ultra-fast Hockenheimring played host to the eleventh round of the season, and the German crowd were expecting another virtuoso performance from championship leader Michael Schumacher. Sadly, they got the opposite as the AquinoPlus driver failed to finish. Instead, it was Fernando Alonso who won from Kimi Raikkonen and Nigel Mansell, who had finally found his feet after his difficult start to the season.

Michael Schumacher was looking to bounce back after his home race disappointment, but unfortunately for him, he suffered another retirement. Worse for him was that Kimi Raikkonen took his second win of the season and closed the gap to just 13 points. Completing the podium were two other possible challengers to the championship, Ayrton Senna and Damon Hill.

With four races to go, both championship were very much up for grabs, but Michael Schumacher was in the best position with a 13 point lead over his nearest challenger despite retiring in the last two races. He bounced back strongly to finish 2nd, and more than that, Kimi Raikkonen failed to finish. In fact, the Maestro Motorsport driver lost 2nd in the championship as Ayrton Senna took his third win of the season and moved in front of the Finn on countback. Finishing in 3rd was Nigel Mansell.

The second Italian race of the season was next up at the super-fast Monza circuit, and it witnessed the season's seventh different winner as Nigel Mansell finally got his just reward. He had been the season's best qualifier with more pole positions than any other driver, and he was able to justify his speed in the race. Completing the top three were Fernando Alonso and Gerhard Berger. With Ayrton Senna failing to finish and Kimi Raikkonen only managing 4th, Schumacher could clinch the drivers championship at the next round. The constructors was a little more open, but the advantage laid with AquinoPlus.

Mathematically, both Kimi Raikkonen and Ayrton Senna could overhaul Michael Schumacher, but realistically, that was an extremely tall order, as both drivers needed to win and for Schumacher to have two catastrophic blunders. In the end at Suzuka, it was academic as Damon Hill beat them both to the chequered flag, which helped Schumacher to win the drivers championship. Raikkonen and Senna were both a bit deflated on the podium alongside a happy Hill. Although the constructors championship wasn't settled, Maestro Motorsport needed a 1-2 finish with AquinoPlus scoring fewer than two points… in order words, Maestro needed a miracle.

The final race of the season took place at the Adelaide street circuit, and from pole position, Nigel Mansell dominated to take his second win of the season in what had been a very strong end for the Gui Racing driver. This effectively and unsurprisingly decided the constructors championship in favour of AquinoPlus. Completing the podium were Fernando Alonso and Kimi Raikkonen. 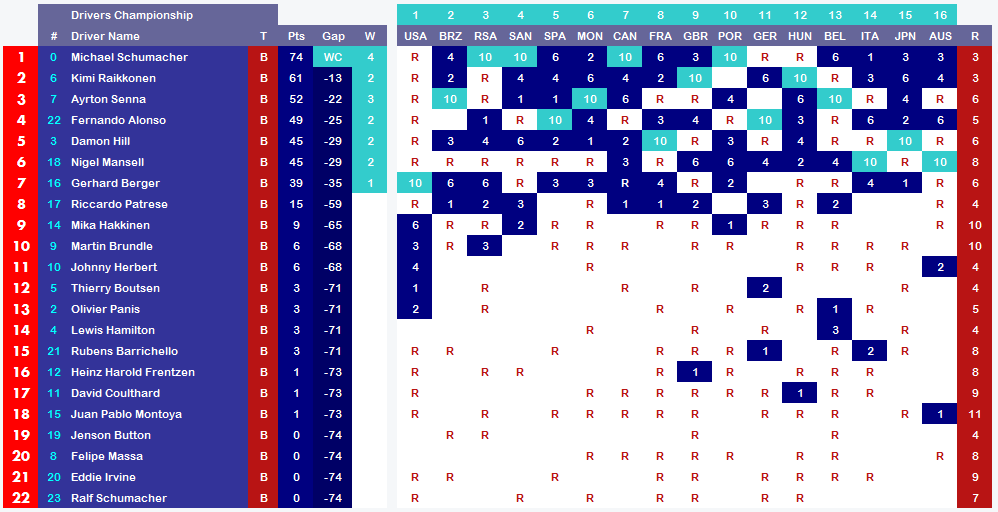 Retrieved from "https://ajayproductions.fandom.com/wiki/Fantasy_F1_Masters_Season_1?oldid=8252"
Community content is available under CC-BY-SA unless otherwise noted.