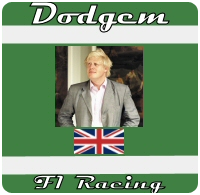 Dodgem are a former team in FF1M, formerly called British Lions. The team is owned by ClarkF1 and its team principal is bumbling politician Boris Johnson. The team has a sister team, Super Dodgy, which has run in both FF1M and FF2M.

After lots of entertaining and fine dining in the best strip clubs of London, in 1979 a Spearmint Rhino Championship run by Prime Minister-elect Margaret Thatcher was formed.

The team had managed to sign a couple of Karting superstars - young Jenson Button (aged -1) and Enzo Ferrari (aged 81).

After an acrimonious split with the series organisers, they set up the rival "Ralf Schumacher will never live up to his elder brother" Doc Brown Memorial Trophy. However the series was a failure due to no other teams competing and circuits made completely of gravel with tarmac run-off areas.

After this fiasco the driving side of the team was put on hiatus with the technical side known as Useless Sods F1 (USF1) providing poor technical support to other teams competing to take part in the inaugural FF1M season and conducting denial-of-service attacks on their rivals' websites.

The Team as we see it today started life as British Lions who were amongst the original 11 teams in the first season of FF1M, but changed their name to Dodgem Racing shortly before the 1990 FF1M Season. They have competed in every season of FF1M and won the Drivers and Teams Championships in 1998. This was notable because coming into that season they were yet to win a race. This changed however when Michael Schumacher won the opening round of that years championship for the team. Schumacher went on to win the Drivers Championship with the most points ever scored by a driver in a single season.

The team holds the honour of being the only team in the history of FF1M to go through a championship season without scoring a single point twice. A feat that it achieved during 1990 and 2002.

On 14th December 2012, Dodgy Racing Inc. LLC Ltd. announced that their Super Dodgy FF2M team had completed its final season and that 2009 would be the final season for Dodgem F1 Racing.

After the first 6 races of their final season, Dodgem decided to rely on old technology and withdraw from testing to avoid taking up a spot in races that could go to a team continuing in the FF1M championship next season. After talks with series guru Ajay, Dodgem were allowed to reinstate their 2009 technology for the final race of the season at Suzuka.

Nick Heidfeld did well qualifying in 10th with team-mate Giorgio Pantano not far behind in 13th. In the race the positions were switched with Pantano finishing a creditable 9th with Heidfeld finishing 12th after a suspension failure near the end of the race.

Super Dodgy began life as a second team entered by ClarkF1 during the 1995 FF1M Season due to extra grid slots being available. Starting off as a financially and legally independent team from Dodgem Racing, it became incorporated into Dodgy F1 Racing Inc LLC Ltd. just before the 1998 FF1M-3000 Season. The team now races in FF2M.

It was announced after the final race of the 2008 FF2M season that Super Dodgy were not entering the 2009 season.

Retrieved from "https://ajayproductions.fandom.com/wiki/Dodgem?oldid=7128"
Community content is available under CC-BY-SA unless otherwise noted.