The 1998 Italian Grand Prix was a FF1M race held at Monza. It was the fourteenth round of the 1998 FF1M Season and was posted on September 23rd 2009. The race was won by Damon Hill in the Willow Images - Ferrari. It was described at the time by race director Ajayrious as one of the best FF1M Grand Prix he had ever watched because of its non-stop action and incident aswell as the battle for the lead between Hill, on fresh tyres and Eddie Irvine (who was looking for the first victory of his career) on old tyres, in the final laps of the race.

The race weekend was also notable as it was the final FF1M-3000 race, which was won by Jarno Trulli for Cramer Racing, The win snatching the series victory from STV Racing's Heinz Harald Frentzen.

Mika Hakkinen got a relatively ordinary start from Pole Position and had a feisty Eddie Irvine right behind him into the first chicane. Irvine was much later on the brakes and took the lead from Hakkinen. Unfortunately for the Finn, he got a nudge from Ralf Schumacher, who made a great start from 6th on the grid. This caused Hakkinen to spin and drop to last. Another incident at the first chicane saw Juan Pablo Montoya airborne after hitting the back of Alex Wurz.

At the second chicane, there was more mayhem, which started off with Allan McNish t-boning Rubens Barrichello after attempting an optimistic move for 5th place. McNish rejoined in 8th place behind Johnny Herbert, Wurz and Montoya. There would still be chaos however as Giancarlo Fisichella and Jean Alesi had a collision which elminated them both. Hakkinen was once again an unfortunate victim as the spinning Alesi left the Finn nowhere to go but into the Frenchman. Hakkinen would pit for repairs.

Irvine led at the end of the first lap ahead of Ralf Schumacher, Hill, Michael Schumacher and Herbert. Montoya and Wurz felt that their first chicane tangle was not enough as they disputed 6th place. Wurz looked to have held the place, but difference in braking speeds meant that McNish came into play. He broke too late, nudged the back of Montoya, which sent McNish spinning out of control. Ironically, the nudge allowed Montoya to take 6th place off Wurz.

Lap 2 also saw both Schumacher’s progress, as first Michael took 3rd off Hill, and then Ralf took Irvine going into the 1st Lesmo. Eddie bit back at the Ascari chicane, but couldn’t make it stick, and Michael’s 3rd place was short lived as Hill tapped him into a spin, dropping Michael initially to 5th, which became 6th when Wurz out braked him into the first chicane.

The Pedersen team provided some action as first Villeneuve had a collision with the Mason of Coulthard at the first chicane, which dropped them both down the order. And then Barrichello tried and failed to overtake the Dark Wolf of Magnussen. The Brazilian spun, and then tapped the back of the Dane into the gravel, but both continued.

Things went from bad to worse for Michael Schumacher as he spun whilst trying to re-pass Alex Wurz for 5th place at the Ascari. This dropped Michael way down the order. In the mix, Verstappen, who had quietly made progress from 15th on the grid, ran slightly wide at the first Ascari, and Montoya sneaked past Jos Verstappen for 6th place under the yellow flag.

Both Pedersen cars were once again providing some action as Rubens Barrichello made steady progress taking 11th place from Kenny Brack on lap 14. Villeneuve was also on the move, taking 9th place from the Maestro Motorsports car of Marc Gene, twice. Barrichello would overtake the Spaniard on the next lap at the Ascari. Also making progress was Michael Schumacher taking 15th from Coulthard.

Lap 18 was where the race changed dramatically, as the leader Ralf Schumacher stopped with Transmission failure. This left Irvine in the lead from Hill, Herbert, Wurz, Montoya and Verstappen.

Lap 19 and Allan McNish got involved in a battle with Kenny Brack for 11th place. The Scot overtook Brack at the Ascari chicane, but Kenny tried to fight back at the Parabolica. Allan moved to the inside on the braking zone and the Willow Images had nowhere to go but into the back of the FJR and Brack went for a drive in the gravel trap. Allan was slow onto the pit straight and came under attack from Junqueria and Coulthard.

Montoya’s race came to an end on lap 20 with an oil leak onto the engine, and it was also the end for Villeneuve as his engine smoked into retirement. The two retirements allowed Michael Schumacher to reemerge into contention as he overtook Gene for 8th place, and into the points.

Irvine and Hill both made their first pit stops and Hill emerged in front of Irvine, but strategy would come into play, as Hill would have to stop again, whereas Irvine wouldn’t.

On much fresher tyres, Hill was flying and he overtook Verstappen for 3rd place on lap 28, then Wurz on lap 29 and finally Herbert for the lead on lap 30. Irvine was catching Verstappen and made his move on lap 32. Irvine broke too late and cut across the chicane, but as he rejoined, he blocked Verstappen on the exit and Irvine was sent the wrong way. Both would continue.

Mika Salo had a quiet race so far, but he joined the quest for points as he overtook Hakkinen for 9th. His quest came to an end though as he spun whilst trying to overtake Gene for 8th. Gene avoided the spinning Finn, but lost out to Hakkinen at the Parabolica.

Hill made his second stop rejoining in 3rd place behind both VTR’s as Irvine retook the lead from Johnny Herbert on lap 38. Meanwhile, Verstappen overtook David Coulthard for 8th place as Hill with much fresher tyres was closing in rapidly on Herbert and Irvine.

On lap 40, Hill was already behind Herbert and outbraked the VTR driver into the Ascari chicane. Herbert then dropped back to 5th with a second pit stop promoting Wurz into 3rd place for Jracing. 8 laps later, and Hill was now right with Irvine for the lead of the race, darting about behind the Ulsterman’s gearbox as Eddie defended his lead aggressively, desperate for his first win in FF1M. On lap 49, Hill got better traction out of the second chicane and got alongside Irvine to take the lead into the first lesmo.

Not even a late-race rain shower could stop Hill as he powered across the line to win a very exciting Italian Grand Prix. Irvine took a well-deserved 2nd for VTR and Wurz scored what would be Jracing’s last career podium with 3rd. Michael Schumacher took a tremendous 4th thanks to a gritty fightback. Herbert took 5th ahead of Verstappen, Hakkinen and Barrichello. 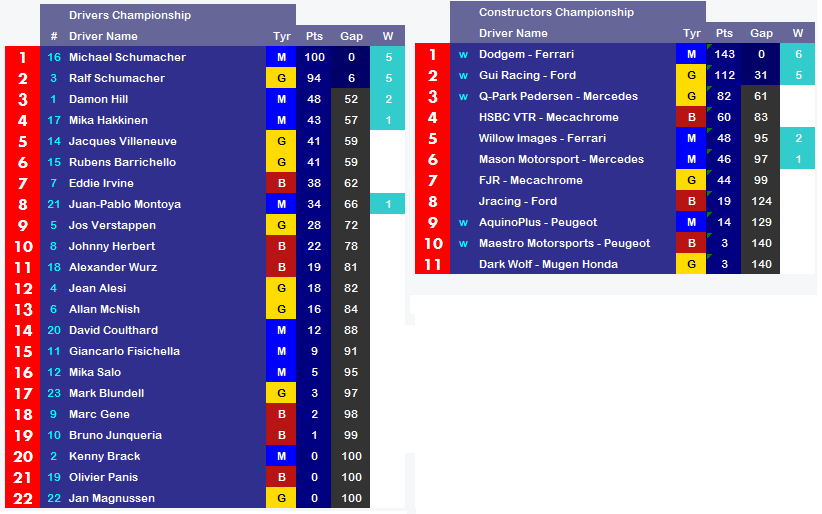