The 1998 FF1M Season was the 11th season of FF1M. It commenced on 30th July 2009 and is concluded on Sunday October 4th. The Drivers Championship was won by Michael Schumacher driving for Dodgem Racing who also won the Teams Championship.

The season contained seventeen races in fifteen countries including the series first night race at the Marina Bay circuit in Singapore and the series first racing visit to the Laguna Seca circuit. This was notable as it marked a distinct change in the series organisers policy to follow the Formula One calender from the season year as much as possible.

The 1998 Season was also notable as the first season to run on a structured timetable with qualifying taking place on a Tuesday or Saturday and Races taking place on Wednesday's and Sunday's. This season the series was once again supported on weekend races by its feeder series FF1M-3000.

World Champion Damon Hill brings the number one to Willow Images this season, but don’t expect a repeat of his championship winning form this year. The team will struggle for development with the customer Ferrari engine, and Kenny Brack has been propping up the timesheets in pre season testing. Prediction: 7th

Gui Racing have been playing down their chances throughout the off season, but they’ve developed Ralf Schumacher over a number of seasons and he could be one of the surprises of the year, whilst the Ford engine is a match for any other works engine in the field. With the teams trademark reliability, you can expect Gui Racing to score good consistent points this season, and maybe even challenge for both titles once again. Prediction: 2nd

FJR had a brilliant end to last season, and recorded their best ever championship finish. But it will be difficult for them to repeat that next season without a works supported engine. The Mecachrome engine has good power, but it will need a lot of development if its to keep up with the Ford and the Ferrari works teams. The team have also lost lead driver David Coulthard and whilst both Jos Verstappen and Allan McNish produced some superb displays last season the pace in testing has been poor and they could both be under threat from test driver Frentzen in results don’t go their way. Prediction: 4th

Like FJR, Vader Trophy Racing had a superb end to 1997 thanks largely to the Renault engine and its unlikely that success will be repeated in 98 despite the team welcoming two quick new drivers in Eddie Irvine and Johnny Herbert. Prediction: 5th

Maestro Motorsport are having a development season after missing out on the top drivers over the winter. Marc Gene and Bruno Junqueira have good development potential with their rookie status, and that will be needed with the new Peugeot engines. Don’t expect anything from the early races, but if testing goes well, they could be regular points scorers by the end of the season. Prediction:9th.

AquinoPlus will also be spending this season developing the Peugeot, however with a stronger driver line up of Mika Salo and Giancarlo Fisichella, you can expect them to be fighting for the lower points a bit earlier in the season. Prediction: 8th

This could be the season in which Pedersen finally returns to the front. Their works Mercedes engine is by no means the best in the field, but with last years runner up Jacques Villeneuve and race winner Rubens Barrichello they have the driver talent to develop and race the car to success. Podium finishes are the bare minimum the team will be expecting this season. Prediction: 3rd.

Once the laughing stocks of the grid, Dodgem now have their best chance to not only win their first race, but challenge for the title. The 1996 championship winning combination of Michael Schumacher and Mika Hakkinen could make it very easy for them with last seasons champion Ferrari Works Engine. Prediction: 1st.

After a terrible 1997, J Racing will be looking for a strong upturn in form this season. Alexander Wurz showed good pace throughout 97 for ARacing and has been brought in alongside the experienced Olivier Panis to lead the teams charge for points next season. Prediction: 10th

They may be new to FF1M, but Mason's press release antics have been a thing of legend in the Paddock over the past 10 seasons from their time in AF1RL. Rookie Juan Pablo Montoya and last seasons Runner Up David Coulthard will lead the charge pushing the customer Mercedes engine to its limits. Prediction: 6th

The second of the seasons newcomers is Dark Wolf. And they will have a much harder baptism in FF1M. Drivers Jan Magnussen and Mark Blundell will struggle to get points in what will be a learning year for the team. Prediction: 11th 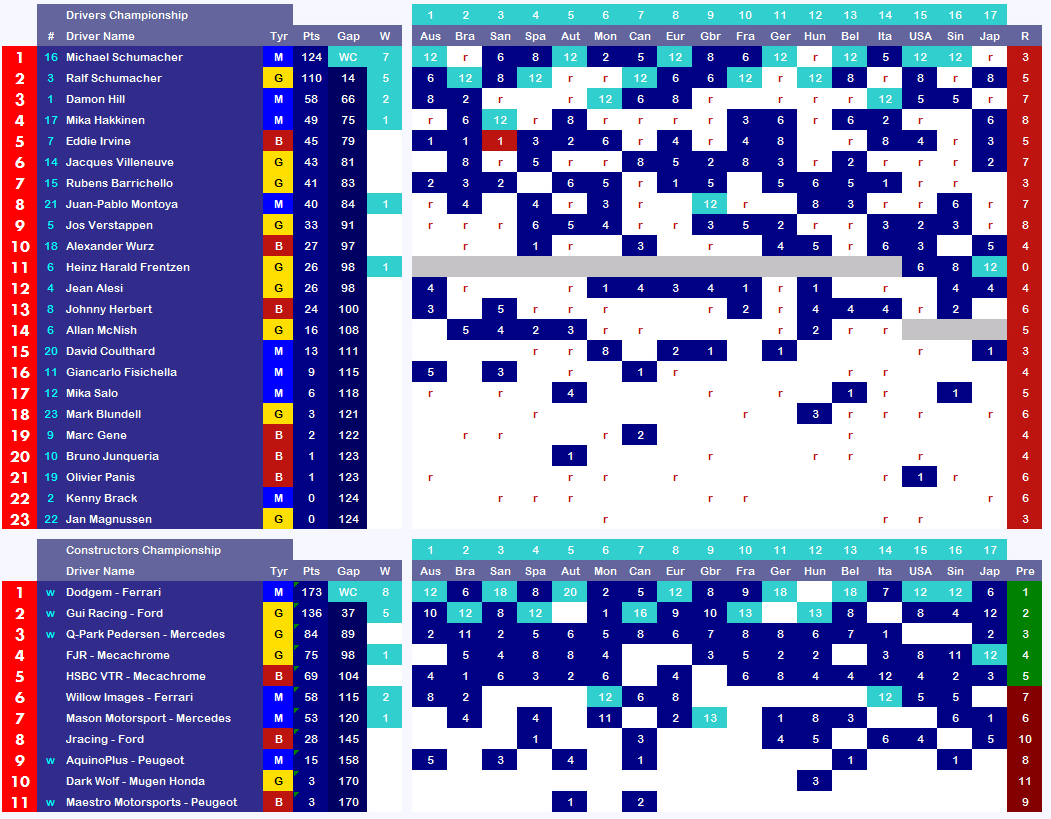 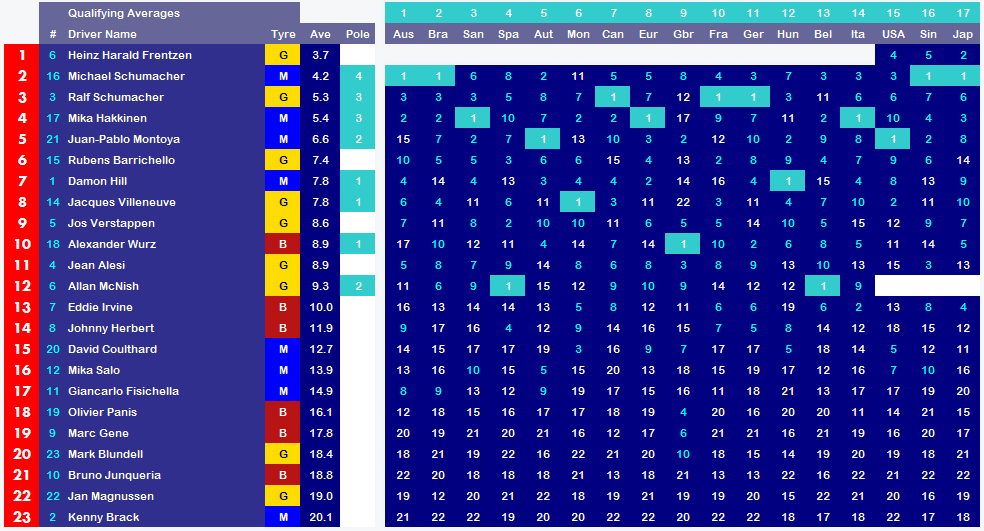