The 1996 FF1M Season was the first season to be run under the Management era, which saw more realistic driver line-ups compared to the Masters era where Alain Prost could team up with Lewis Hamilton.

The season saw Michael Schumacher win his 2nd drivers championship, his first since the 1988 FF1M season. He was driving for AquinoPlus, coincidentally, the same team he drove for when he took his first championship. Thanks to Michael's 6 wins and teammate David Coulthard's 1 win at the final round at Suzuka, AquinoPlus took their fourth and final constructors championship.

The season marked the only win of Johnny Herbert's FF1M career, and also Jean Alesi's final season at FJR before moving to Willow Images for the following season. This was Alesi's eighth consecutive season with the Yorkshire team, a record later matched by Marc Gene and Dark Wolf.

The season is also notable for the highest championship finish for Ajay Motorsports with 4th place and two wins for Damon Hill, who himself took 3rd place in the drivers championship. The season also marked the return of Pedersen after a one season hiatus, although they struggled to last in the championship.

The first race of a brand new era effectively meant a completely altered form book with three time Fernando Alonso not participating in FF1M until at least the 2000 season, but it was the familiar names of Michael Schumacher and AquinoPlus who took pole position ahead of Maestro Motorsports Mika Hakkinen. The two would battle for the championship throughout the whole season, and first blood went to Hakkinen after Schumacher suffered a retirement. Jos Verstappen took a very respectable 2nd for Aracing, who had returned to FF1M after a four season absence, while 3rd was Willow Images' Johnny Herbert.

Roles would be reversed for the Brazilian GP as Schumacher dominated from pole position to win, and it was Hakkinen's turn to suffer a retirement. To sweeten the result for AquinoPlus, Schumacher's teammate David Coulthard came home in 2nd, giving the Brazilian team a 7 point lead in the constructors championship. In fact, it was a Brazilian clean sweep, as Gui Racing's Rubens Barrichello completed the podium.

The second consecutive South American round saw Schumacher and Hakkinen resume their battle as they locked out the front row once again. Although Schumacher took his third pole in a role, it was Hakkinen who won out this time, with Schumacher once again failing to finish. Taking his second 3rd place in a row was Rubens Barrichello, but a new name sandwiched them, the Ajay of Damon Hill. Amazingly, this was Ajay's first ever podium after seven seasons of being the selfless minnows of FF1M.

The Nurburgring played host to the 4th round of the championship, and after retiring from the Argentine GP, Schumacher was keen to impress in front of his home crowd, and he duly delivered, as he took his second win of the season. He was joined by Hill and Hakkinen, the Finn having started from pole position.

There were changes afoot for the Pedersen team, who had returned to FF1M after a one season hiatus, as Argentine driver Norberto Fontana was replaced by Italian Vincenzo Sospiri. The change appeared to have worked, as despite having to cope with wet conditions at Imola, Sospiri scored a point on his debut. Another Italian had a good race, the FJR of Giancarlo Fisichella, who finished 4th, but it was the familiar sight of Schumacher and Hakkinen battling away for the win, with the German coming out on top for his 3rd win of the season ahead of the flying Finn. Completing the podium was Coulthard.

The tight confines of the principality played host to yet another titanic battle between the two championship contenders, who making it very clear that one of the two was going to win the 1996 FF1M championship. For the sixth time, both qualified on the front row, and both finished in the top two, with Schumacher taking win number four. Completing the podium was Barrichello.

Changeable conditions in qualifying meant a rather mixed up grid. It was an all AquinoPlus front row, as Schumacher and Coulthard read the conditions perfectly, while the opposite was true of Maestro Motorsport, as Hakkinen and Salo qualified down in 17th and 19th. From there, Hakkinen was on damage limitation, but even Maestro must've been surprised to see him finish 3rd, one place behind Schumacher. That meant the season's third different winner was Damon Hill, who took outfoxed Schumacher to take Ajay's first ever win.

The FF1M circus travelled across the Atlantic, and to Montreal for the Canadian GP. For the first time this season, neither Schumacher nor Hakkinen took pole position. Instead, it was the home hero Jacques Villeneuve who qualified 1st for Gui Racing, but sadly, he couldn't convert that into a dream win. Instead, in a race of high attrition, an even more surprising result occurred as from 8th on the grid, the Willow Images of Johnny Herbert took his first ever win, and Willow Images first since the 1994 Portuguese GP. 2nd was Jos Verstappen, while Schumacher could only manage 3rd, but that was better than what Hakkinen could manage, a retirement. The race was so chaotic that the 8th placed driver wasn't even classified and points were only awarded to the top 7.

Having not finished in front of his championship rival since Argentina, Hakkinen was looking to make gains on Schumacher going into the second half of the season. It started well, as the Finn took his 2nd pole position of the season at Magny-Cours with Schumacher down in 3rd. However, for the first time this season, neither driver finished, and it was Jacques Villeneuve who made up for his Canadian GP disappointment by winning the French GP. Rubens Barrichello made it a Gui Racing 1-2, while David Coulthard ensured that AquinoPlus had finished every race on the podium so far by taking 3rd.

At Silverstone, Schumacher took his first pole position since Spain, with championship rival Hakkinen joining him on the front row. Once again however, their championship battle would be disrupted by a resurgent Jacques Villeneuve, who took back-to-back wins. Schumacher could only manage 3rd, which was still better than what Hakkinen could manage, another retirement. The race saw seven British drivers take part, and four of them finished in the points; Damon Hill in 2nd, Eddie Irvine in 5th, Allan McNish in 6th, and David Coulthard in 8th.

Once again, it was a front row lockout between Schumacher and Hakkinen, although it was the Finn who outqualified the German this time around. For the first time since Argentina, Hakkinen beat Schumacher to chequered flag, and what's more for the Maestro driver, Villeneuve the disrupter got in between the two to finish 2nd. It was a good race for Maestro Motorsport with Mika Salo coming in 5th, but this would turn out to be Salo's last race as he would be replaced by Swede Kenny Brack for the rest of the season. Another post-race change was Dodgem's Pedro de la Rosa making way for an 8th Brit, Oliver Gavin.

Disappointing Schumacher's adoring home fans seemed to spur Hakkinen on as he took his first back-to-back pole of the season, with his rival joining him on the front row. Hakkinen dominated the race to take his 4th win of the season, and with Schumacher retiring from the race, Hakkinen led the championship for the first time since Imola. With Hill and Barrichello joining the Finn on the podium, this marked the first time AquinoPlus were absent from the podium.

The magnificent Spa-Francorchamps circuit started off the final quarter of the 1996 FF1M Season, and what promised to be a titanic end to an exciting battle between the two championship protagonists. Further down the field, there were more driver changes, as Pedersen's Jan Magnussen was replaced by Norberto Fontana.

Wet conditions during qualifying threw a spanner in the works, as Hakkinen could only qualify 6th, while Schumacher was down in 13th. Taking pole position was the driver who recently took over 3rd place in the championship, Damon Hill. The race saw a completely different story, as Schumacher produced a sensational drive from 13th to take a brilliant win, retaking the championship lead from Hakkinen, who suffered his 5th retirement of the season. VTR's Allan McNish showed that qualifying in 4th was no fluke, as he took a brilliant 2nd, giving himself and the team's first ever podium finish, while taking 3rd was FJR's Jean Alesi. After a difficult first half of the season, the team had been quietly chipping away at the midfield and were now challenging Willow Images for 5th in the constructors championship.

Having lost the championship lead, Hakkinen took a much needed pole position with his championship rival down in 4th behind Villeneuve and Hill, but unfortunately for the Finn, he couldn't convert that into a much needed win. In fact, he failed to finish, and although Schumacher only finished 5th, that gave him a very handy 14 point lead going into the penultimate race. What's more, Schumacher and Coulthard's efforts secured the constructors championship for AquinoPlus.

The race winner was Ajay's Damon Hill, which almost secured 3rd place in the championship for him. Sensationally, his teammate Olivier Panis took 3rd place, making it two Ajays on the podium. Sandwiching the two was Villeneuve.

Having suffered two retirements in a row, Hakkinen needed to win to guarantee him a shot of the championship at the final round, but things didn't go to plan during qualifying as he could only manage 5th. Schumacher was 3rd behind Villeneuve and Hill, who would both drive for Gui Racing next season. As it turned out, Schumacher was on top form during the race as he took his 7th win of the season, and with it, his second FF1M championship. A happy Hill was 2nd, while a deflated Hakkinen was 3rd.

For many, the final round of the championship was all about pride, but there were still a few minor placed battles to be decided, such as the one for 5th in the constructors championship between Willow Images, FJR, and Aracing. All three teams were separated by just 12 points, and Suzuka is one of the most notorious circuits on the calendar.

Taking his second pole position of the season was Hill, but like Spa, he couldn't convert pole position into a win. In fact, he was one of the many retirements during the race, which included Schumacher and Hakkinen. The final race of the season saw David Coulthard take his first win since the 1993 Japanese GP, back when he drove for the Super Alex team. 2nd was Rubens Barrichello, while 3rd was Olivier Panis.

The battle for 5th eventually went the way of Willow Images after a dramatic final few laps saw Alesi retire from 4th place, which meant FJR missed out on 5th by just 2 points. 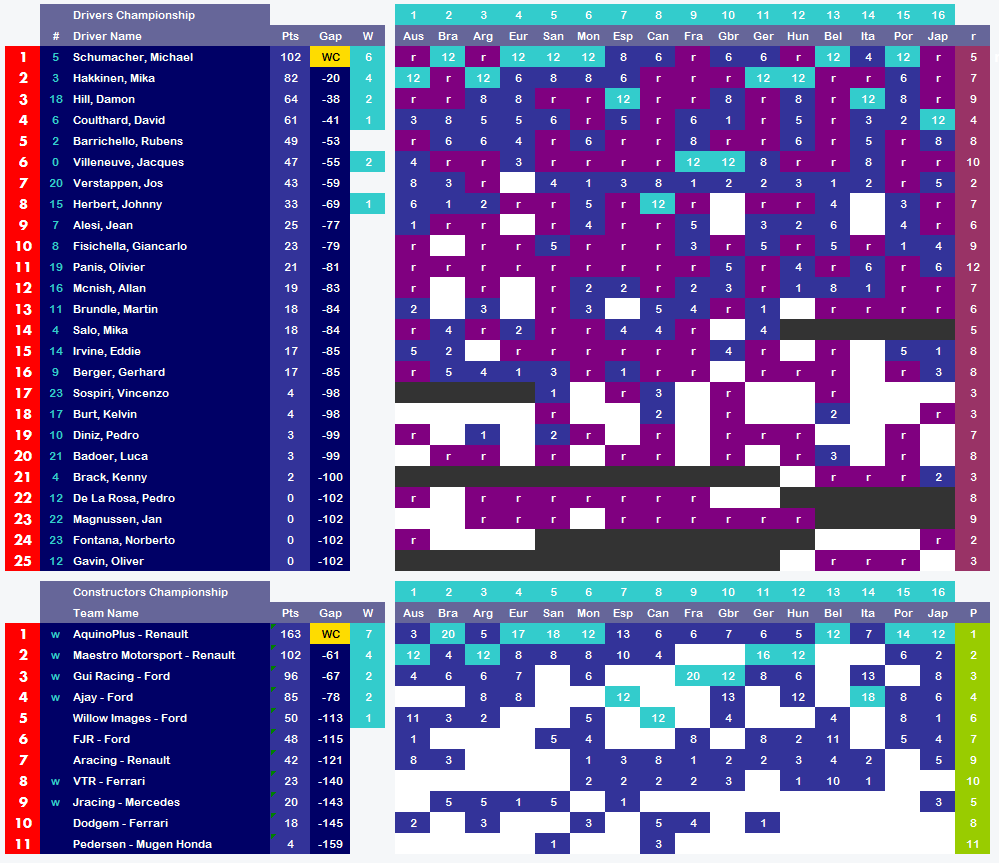 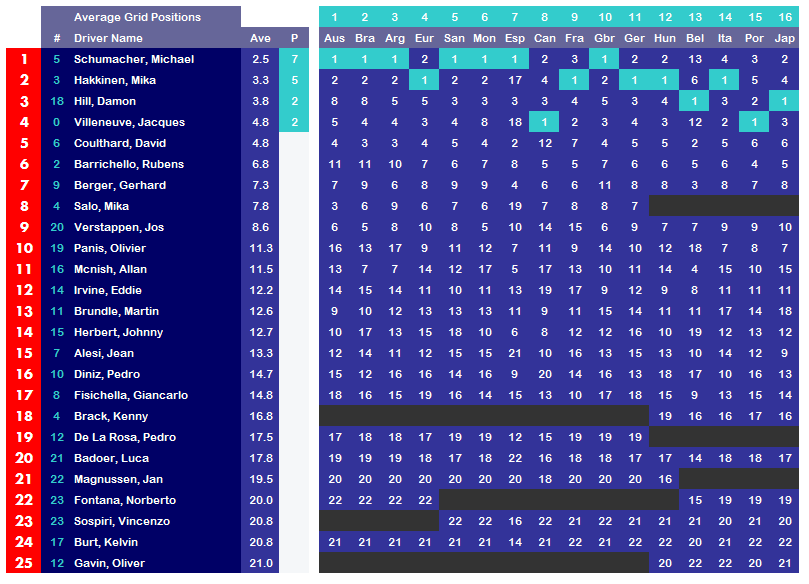 Retrieved from "https://ajayproductions.fandom.com/wiki/1996_FF1M_Season?oldid=8253"
Community content is available under CC-BY-SA unless otherwise noted.